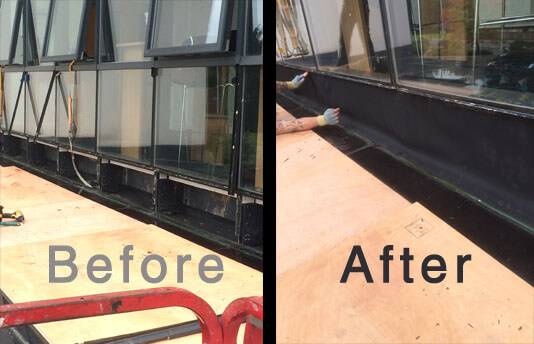 Dortech Maintenance have just completed works at ‘In Communities’ offices in Shipley, in which they were commissioned to Investigate, diagnose, rectify and test a glazed roof interface into existing curtain wall which had suffered ongoing leaks since its original installation in 2013.

During the intrusive investigation, the team successfully identified a number of problems with the original glazing including, blocked drainage channels, insufficient sealant application and no waterproof membranes. Drainage channels were consequently cleaned out, interface details were resealed and a new, EPDM waterproof membrane was installed. The screen was subsequently water tested and no further leaks were identified.

The client was absolutely delighted with the work carried out and stated that:

“The Work was carried out exactly as we had told them, the team quickly identified a number of problems, and set about rectifying the problems found in a neat and efficient manner. The works were tested and drenched with water, post completion and no water ingress was found.”